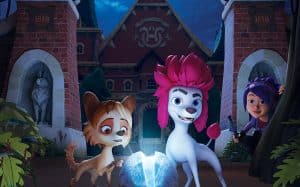 The day has come when Freddy Lupine, heir to a proud line of lycanthropes, will go under the moon to discover for the first time his animal appearance, which he hopes will be the most impressive of all time. However, everyone is surprised when, after a shy howl, a harmless poodle appears. The elders of the pack will give Freddy one day to prove that he can be a ferocious wolf or he will be banished forever. To achieve this, he will have the unexpected help of Batty.
Veteran Disney seasoned animator and director of films like Maya the Bee: The Movie and Sequel, Alexs Stadermann takes control of his first original story with this fun animated film starring a werewolf boy. The adventure of this young man, who will have to prove to his fellow human beings that under his appearance as a harmless poodle there is a fierce and noble wolf, serves 100% Wolf: Little Big Wolf to transmit to the smallest of the house a powerful message of that what is truly important is inside. Family, friendship or finding oneself are the main themes of this film full of action and a sense of humor that, together with its agile pace, manages to entertain and provoke laughter from audiences of all ages. Newcomer Ilai Swindells voices this clumsy and kind-hearted protagonist, while Jai Courtney (Suicide Squad), Jane Lynch (Ralph Breaks the Internet) or Samara Weaving (Wedding Night) do the same with the friendly supporting characters.