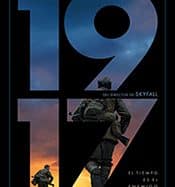 1917. During the crudest moments of World War I, the Schofield and Blake capes are chosen for a mission that, more than dangerous, is a real suicide. In a race against the clock, both must cross the enemy lines to deliver a message that could save 1,600 of their fellow soldiers, including Blake’s brother, from certain death. On their way, full of enemy fire and deadly traps, they will test their courage and their ability to sacrifice. Since childhood, Oscar-winning director Sam Mendes (Specter) has been truly fascinated by World War I because of the stories his grandfather told him about the conflict. As a tribute to that man of just 1.68 meters high who literally ran through his life between the trenches of the Western Front to deliver messages to the Allied troops, 1917 follows in a continuous sequence sequence to two young men who face on a suicide mission: cross enemy lines to save 1,600 of your comrades from certain death. Some of the events that Alfred H. Mendes lived in his own flesh, and stories that other soldiers told him, are immortalized in this warlike movie of a fast paced rhythm; a true visual spectacle that places the viewer in the first line of the conflict based on action and emotion. George MacKay (The Secret of Marrowbone) and Dean Charles Chapman (The King) are the protagonists of this film, awarded with two Golden Globes, which features luxury secondary such as the Oscar-winning Colin Firth (The Return of Mary Poppins), the Nominated for an Academy Award Benedict Cumberbatch (Avengers: Endgame) and Richard Madden (Rocketman), among others.