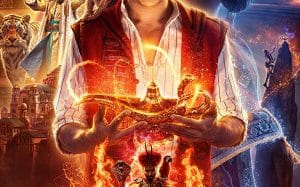 Agrabah has no secrets for Aladdin, a rogue petty thief who dreams of doing big things. Across the city, Jasmine, the sultan’s daughter, wants to experience life far from the palace and her father’s attempts to find her husband. Meanwhile, Jafar, the evil royal adviser, conspires to take away the throne. When Aladdin finds the lamp of the Cave of Wonders and releases the Genie, he will begin a fantastic adventure full of love and dangers that will change their lives. It was a matter of time that Aladdin, one of the great classics of the Disney factory and winner of 2 Oscars, gave the leap to the real image. The responsible for this adaptation in flesh and blood of the adventures of this cute pickpocket, the beautiful Jasmine, the evil Jafar and the Genie of the lamp is Guy Ritchie (King Arthur: The Legend of Excalibur), who directs an exciting and spectacular film where the most memorable musical moments and numbers of his predecessor take on a new dimension. That story of love, friendship and betrayal is maintained in this new version where its protagonists, from very different strata of society, strive to keep faith in themselves and, at the same time, renew with a valuable message of empowerment feminine that will delight the fans of always and those who, for the first time, delve into this magical universe. Naomi Scott (Power Rangers), Mena Massoud (Jack Ryan), Marwan Kenzari (Murder on the Orient Express) and Oscar-nominated Will Smith (Hidden Beauty) lead the cast of this film, which, in the musical section, has the responsible for the original film and two new songs composed by Benji Pasek and Justin Paul, Oscar winners for The City of Stars (La La Land).