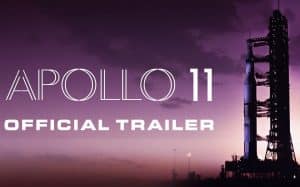 Coinciding with the 50th anniversary of the Apollo 11 mission, this documentary film that offers unprecedented images of the great historical milestone in which we set foot on the Moon is premiered. Built from archival material provided by NASA and filmed in 8k, Apollo 11 travels to the past to remember and honor Neil Armstrong, Buzz Aldrin and all those who made possible the great feat of taking a small step for man, but a great step for humanity. Apolo 11 is not a documentary to use, as it does not have interviews or expert opinions. It is an authentic film, built entirely from redigitalized archival material and redesigned to be contemplated on the big screen, which includes unpublished images in 70 mm, and some of the highlights of the 11,000 hours of unlisted audio recordings from those days when the inhabitants of the Earth contemplated the Moon to see with their own eyes how man’s great dream came true. An epic feat that united humanity like no other historical event ever managed to do it and that now shows on the big screen with great success of public and critics, raising more than 9 million dollars in the United States, a number within reach of few documentaries This film event, which has been in production for half a century, is directed by the Emmy winner Todd Douglas Miller (Dinosaur 13) and premieres coinciding with the 50th anniversary of the arrival of man on the Moon. The documentary allows us to contemplate the Eagle lunar module and all the details of the mission from the perspective of the astronauts, the Mission Control team and the millions of spectators who followed the event live from Earth.