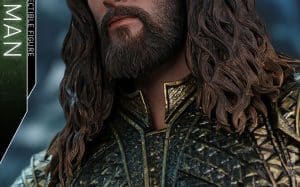 “Water Man” has already appeared on two occasions, jumping to help Batman and Superman when he needed it, but few people know him in depth on this Arthur Curry. He is the supreme ruler of the underwater kingdom called Atlantis, and so far has done great in this role, but with his appearances on the surface in the Dawn of Justice and the League of Justice, he is in a position to control a revolt that is announced the part of its underwater people that threatens to unleash and invade the shore.

Arthur, who is only half man, has the ability to manipulate ocean tides, talk to other aquatic beings, swim supersonic speeds, and hold superhuman power. With these qualities at hand, Arthur must go ahead and lead his people to victory when an outside threat threatens their safety. He is caught between the underwater and terrestrial worlds, both of which mean a lot to him and try to make sure both worlds coexist without problems or conflicts.