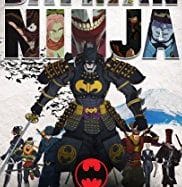 While battling Gorilla Grodd at Asylum Arkham, Batman is caught in the time machine he owns and is sent to Feudal Japan. There, he is pursued by some samurai who are in the service of Joker. Trying to escape, Batman meets Catwoman and reveals that everyone has arrived there two years ago as a result of Grodd’s time machine.
He finds out from her that the most dangerous criminals in the city of Gotham became feudal lords, succeeding in tricking / defeating the locals. To stop these villains from changing the history of humanity, Batman and Catwoman have to get to that time machine in Arkham Castle (the former Asylum). Batman discovers that Alfred Pennyworth was also thrown in the past and built a Battle outside of Edo. When Joker’s troops storm their hideout, Batman runs his Batmobile to the Castle, and as he arrives there, he turns into a giant robot fortress.
When Batman faces Joker, he is forced to leave to save a mother with her baby from being crushed by the robot’s hand. He turns his Batcycle into a protective suit to defeat Bane and prevent the robot from crushing the two. To his surprise, his mother proves to be none other than Harley Quinn herself, who immediately attacks him. When Batman is surrounded by Joker’s minions, he is helped by ninja fighters who appear from nothingness and get him out of trouble.