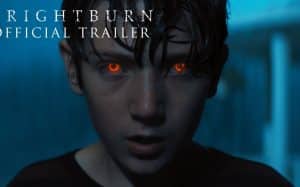 Tori and Kyle Breyer dream of being parents, but their infertility problems make it impossible. Their prayers seem to be heard when they discover a ship coming from another world with a baby inside it. Marriage adopts it and, as it grows, it becomes a clever and curious boy who fills them with pride. However, when he reaches puberty, the child will begin to develop superhuman powers and an evil that will turn him into a sadistic, terrible and unstoppable force. James Gunn (Guardians of the Galaxy Vol. 2), as a producer; his brother Brian and his cousin Mark, screenwriters, and director David Yaroveski (The Hive) intend to give a radical turn to the superhero genre in this film that, far from focusing on the spectacularity and the epic of other productions with a bigger budget, It proposes a story of pure terror. The son imagines what might have happened if the child from another planet landing on a farm in Kansas had become a ruthless psychopath instead of the well-known hero in the red cape and the S in the chest. Inspired by the world of comics, but also in slasher classics such as Halloween Night, this fresh and original film promises spooky surprises and scares with high doses of violence not suitable for all audiences. Elizabeth Banks (Who’s killing the cranks ??) and Jackson A. Dunn (Avengers: Endgame) lead the cast and star in this peculiar mother-child relationship, on the verge of a more complicated puberty than normal, which serves as the driving force behind the plot. Rounding out the cast are David Denman (The Luck of the Logan) and Meredith Hagner (Creative Control), among others.