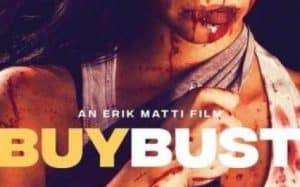 Because of the war on drug trafficking in the Philippines, most of the cities that are considered bad-hearted in the country are now released from this scourge called drugs. Drug Trafficker Teban (Alex Calleja) is being interrogated by detective Dela Cruz (Lao Rodriguez) and detective Alvarez (Nonie Buencamino) who is trying to find out where a famous drug lord named Bigjo Chen (Arjo Atayde) is hiding. When he finds out that Chen is hiding in a neighborhood in Manila, the authorities carry out an operation to capture him.
Novel police officer Nina Manigan (Anne Curtis) joins a newly-formed elite unit that fights against drug traffickers after having been previously involved in a similar operation that had a dramatic ending in which all her colleagues and They lost their lives. The operation had this outcome because of the corrupt policemen who gave them the raid plan. Now the new team has to work together to catch Chen.
Teban is used as a bait to lure Chen into a certain place and capture it, but the latter does not arrive at the place announced. Later, the anti-drug soldiers assaulted the Garcia slum and split into two smaller groups. There, Teban meets with a certain Chongki (Levi Ignacio) who should take him to Chen, but their operation is discovered and much of the unity is slaughtered in the ensuing conflict. Those who manage to escape with life find themselves in the ingrained situation of being captive in this slum and having to fight both the mafia groups and the civilians there.