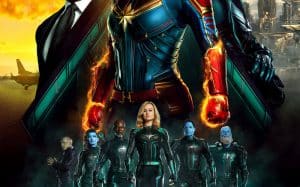 Carol Danvers is a former Air Force pilot recruited by the kree, an alien race, to be part of their elite military unit. Unable to discern which of her memories are real and which are implanted, Carol returns to Earth, now the center of the war between the kree and the skrull. Along with a few allies, she will have to solve the mystery of her past and fight to become one of the most powerful heroines in the galaxy: Captain Marvel. The Marvel Cinematic Universe receives a new and powerful tenant: Captain Marvel. The character created by Roy Thomas and Gene Colan in 1968 becomes the first superheroine of the House of Ideas to star in a solo movie. Also new is the era, a decade of the 1990s unprecedented in the UCM where the Earth has become the battlefield of a devastating interplanetary war that could reduce it to ashes. The duo formed by Anna Boden and Ryan Fleck, responsible for indie hits such as Half Nelson and The Last Stand, are at the controls of this fast-paced action-packed tape and stunning special effects that also sheds light on the past of well-known characters like Nick Fury, Phil Coulson or the villain of Guardians of the galaxy Ronan The Accuser. The Oscar-winning Brie Larson (Kong: The Skull Island) puts herself in the shoes of one of the most powerful characters in Marvel mythology in this film that talks about learning from the past to know oneself. He is joined in the cast by Oscar nominees Samuel L. Jackson (Glass (Crystal)), Jude Law (Fantasy Animals: The Grindelwald Crimes) and Annette Bening (The Seagull), as well as Ben Mendelsohn (Ready Player One) and Lee Pace (The Idol)) as main villains.