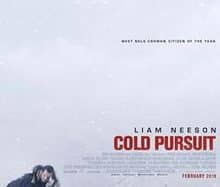 Nels Coxman works as a snow plow driver in a remote mountainous region of Canada. His neat and peaceful life turns around when he receives the terrible news that his son has been killed because of the drug business. Torn and eager for revenge, the father will use his hunting skills to wage a meticulous and risky war, in which he will have to face drug traffickers without arousing the slightest suspicion of the authorities. The Norwegian director Hans Petter Moland (Aberdeen, Redemption: The cases of Department Q) makes the leap to Hollywood with Revenge below zero, adapting his popular film One after the other (2014), counting on this occasion with Liam Neeson as the protagonist, who take over from Stellan Skarsgard when it comes to embody the vindictive Nels. This is an action thriller with touches of black humor written by Frank Baldwin and produced by Michael Shamberg (responsible for great hits like Pulp Fiction or Django Unchained). Set in the city of Kehoe, in the Rocky Mountains, Revenge below zero was actually shot at locations in Fernie, Vancouver and Alberta (Canada), with the operator Philip Ogaard of the direction of photography. The original soundtrack is provided by George Fenton, an English composer with a long career with five Oscar nominations under his belt (including Gandhi, Dangerous Friendships and The Fisher King). Tom Bateman, Laura Dern and Emmy Rossum (currently thanks to her role as Fiona in the Shameless series) accompany Liam Neeson in the cast. The protagonist of Schindler’s List continues with this film exploring his abilities as an action hero, having been headliner of the Venganza trilogy and also of the last thrillers directed by the Spanish Jaume Collet-Serra.