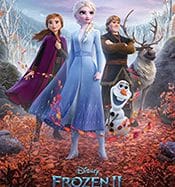 Elsa was born with the incredible power of creating ice and snow. After years hiding this gift from the town of Arendelle for fear of being persecuted for it, Elsa is happy with her sister Anna and the rest of her friends. However, there is still something that makes her uneasy: a voice that tells her that there is something in her past that she does not know and endangers the entire kingdom. To solve this mystery, Elsa, Anna, Olaf, Sven and Kristoff will embark on an adventure through forests and dark seas. In 2013, Disney managed to outdo itself and made Frozen: The Ice Kingdom the highest grossing animated film of all time, in addition to winning 2 Oscars. Six years later, the anticipated sequel to the adventures of this group of endearing characters takes them through a dangerous journey beyond the borders of Arendelle to discover the secret of Elsa’s powers. Jennifer Lee and Chris Buck, responsible for the first installment, re-direct this story, inspired by the story of Hans Christian Andersen, where the now ice queen will have to discover the secret of her origins to save the world. With this starting point, Frozen II deepens the fraternal relationship of the protagonists and proposes a more mature, dark and complex story where they talk about maturity and find their own way. With the empowering spirit of its predecessor intact, the film changes the cold winter for a more autumnal color palette, to which seven new songs full of humor, emotion, action and epic are added. Kristen Bell (The Great Rash (Bad Mothers)), Jonathan Groff (Mindhunter), Idina Menzel (Glee) and Josh Gad (Murder on the Orient Express) repeat in a voice cast joined by Evan Rachel Wood (The idus of March), among others.