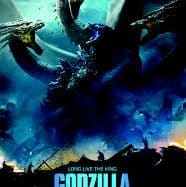 Godzilla- King of the Monsters

Finally, the Earth has rebelled, and gigantic ancestral creatures, who believed themselves to be myths, have awakened after centuries of lethargy and now sow destruction in their struggle for the supremacy of the planet. In a heroic effort, the crypto-zoological agency Monarch seeks the solution to this terrible threat represented by monsters the size of gods. With all humanity in danger, the only hope will be to free Godzilla and confront him with Mothra, Rodan and his great nemesis: King Ghidorah. After Godzilla and Kong: Skull Island, Warner’s MonsterVerse and Legendary Pictures continue their expansion with Godzilla: King of Monsters. Michael Dougherty (Krampus, Damn Christmas) is at the controls of this new (and bigger) delivery that promises a huge show of destruction, epic and action. In his third Hollywood adaptation of the adventures of the gigantic Torto, which has been sweeping Japanese cities for 65 years, Godzilla will face some of the best-known creatures of his mythology, such as Mothra, Rodan or the most feared of all: King Ghidorah . Although the great combats for the hegemony of the Earth between these titans are the great claim of the film, in the background there is a plot with ecological background, the drama of a family separated by tragedy and the already characteristic confrontation of opinions between scientists and military personnel. Oscar nominees Ken Watanabe (Pokémon Detective Pikachu) and Sally Hawkins (The Water Form) resume their roles and share the poster with the new signings of Millie Bobby Brown (Stranger Things), Kyle Chandler (First Man) and the Oscar nominee Vera Farmiga (The candidate).