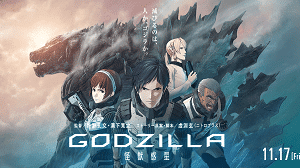 Godzilla: Planet of the Monsters

In the last summer of the 20th century, the giant monsters began to appear throughout the corners of the world, causing chaos in their path. Finally, a powerful creature called Godzilla appeared and destroyed both monsters and humans. Two species of aliens, Exif and Bilusaludo, eventually arrived on the planet. Exif tried to convert humanity into their religion, and Bilusaludo is trying to emigrate to Earth promising that if humanity accepts them, they will defeat Godzilla with Mechagodzilla.

However, Bilusaludo fails to activate Mechagodzilla, which forces all humans and aliens alike to abandon the Earth and go into space in search of another habitable planet. Twenty years later, mankind found Tau Ceti, somewhere 11.9 light-years away. Captain Haruo Sakaki closes in a shuttle and threatens to bomb the area if they leave for Tau, so the emigration project is abandoned.

Haruo is convinced that the planet is not habitable, and the colonizing crew consists of its vast majority in elderly people, including his grandfather, whom he thinks is just a depopulation plan devised by the ship’s committee to reduce resource consumption in a limited situation. Haruo’s plan fails and gets arrested, and from his cell he sees the ship with the colonizing crew exploding when it enters the atmosphere of the new planet.