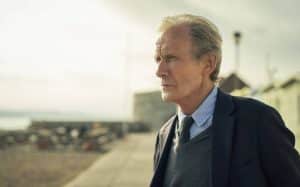 Jamie heeds the request of his father, Edward, and for a weekend he leaves London to visit his family in a quiet seaside town in southern England. There he discovers that the reason why Edward has called him is because he is going to tell his mother, Grace, that after 29 years of marriage, he has met another woman and is going to live with her. After this devastating news, the three will face the new situation in different ways, which will force them to compose themselves and move on.
As a young man, two-time Oscar-nominated screenwriter William Nicholson (A Reason to Live) had to deal with his parents’ divorce after thirty years together. That experience has served as the inspiration for his second feature film as a director, Return to Hope Gap, a simmering drama that reflects on separations in older couples and the emotional confusion that these can cause both in those involved and in children already adults. The spectacular scenery of the Seaford cliffs, in the south of England, serve as an exceptional setting for this intense face-to-face between Oscar nominee Annette Bening (Captain Marvel) and Bill Nighy (Pokémon: Detective Pikachu). Josh O’Connor (Florence Foster Jenkins) completes the trio of protagonists of this human and honest film that, with the right doses of sentimentality and a trace of hope, reflects the complexities and costs of marriage and the burdens that parents generate on their offspring.