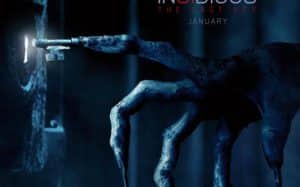 In 1953, young Elise Rainier lives with her mother Audrey, brother Christian and father Gerald in New Mexico. Gerald works as an executor in an area jail. Elise says he can see the ghosts of the prisoners who are being executed on the electric seat in jail, which is terribly worrying about Audrey and angry Gerald. One night, when Elise and Christian go to bed, Elise meets a ghost in their bedroom and both children are terrified.

As a result, both parents enter the room and, angrily great need, Gerald knocks Elise and locks it in the basement of the house. There, a voice lures Elise to a door he opens. A demon named Key Face comes out of that door and possesses Elise. Audrey investigates things and finds the possessed Elise hanging from a cable controlled by the evil entity, killing her. Elise is released from custody when Gerald makes his appearance and finds Elise and Audrey, the latter being dead.

Several decades later, Elise works as a paranormal investigator with two colleagues named Specs and Tucker, picking up telephone calls. She is called by Ted Garza who has experienced some paranormal activities since moving to a new home. While talking on the phone, he tells him that he is now living in the house where Elise has grown up. Hesitantly at the beginning, Elise tells his two colleagues what he did when he was young and then decides to accept the job to adjust the accounts once and for all.