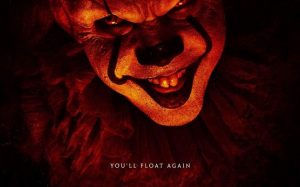 Although the small town of Derry has almost forgotten it, those who long ago formed the Losers Club still have that twenty-seven-year-old summer in which they faced the sadistic clown Pennywise. When Mike, the only one who stayed in town, warns them that there are new murders and that “that” has returned, the old gang, now made up of adults who lost contact, will have to meet again and face the trauma that marked them for life. Pennywise, the evil clown who terrorized several generations in the remembered 90’s miniseries and, above all, Stephen King’s memorable novel, is back. In It: Chapter 2, Andrés Muschietti (Mamá) completes the successful journey that began in 2017 with It, the highest grossing horror film of all time, in a film that addresses the part of the story where the children of the Club de los Losers, turned into traumatized adults, are forced to return to their hometown for a new and definitive confrontation against evil. The epic and terror, which reaches a new level here, are the main drivers of a film that, unlike its predecessor, is closer to the narrative structure of King’s work to play with two timelines: when the protagonists They were children and in adulthood. The result is a feature film that, again, combines humor, mystery, adventure, love, friendship and an ode to the power of imagination with scenes that freeze the spectator’s blood. Oscar nominee Jessica Chastain (Molly´s Game), James McAvoy (X-Men: Dark Phoenix) and Bill Hader (And suddenly you) lead the cast as adult versions of the characters of Sophia Lillis, Jaeden Martell or Finn Wolfhard For his part, Bill Skarsgard (Wild Nation) repeats as a villain in this film that he does not avoid the most controversial passages of the original material to criticize the fanaticism or intolerance of today’s societies.