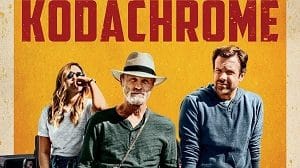 Matt Ryder (Jason Sudeikis) is an executive director of an independent record label in New York and finds himself at a crossroads in his life. He is guided in the profession by the principle of talent, considering that this quality must prevail at the expense of temporary “fashion”, but finds it difficult to implement it in an industry where changes are all the way and from one day to the next. He has two weeks to sign a contract with a rock band called The Spare Sevens.

His dedication to quality is not at all a coincidence that he shares it with his irritating father, Ben (Ed Harris), even if he does not want to admit it, and he is breaking up with him several years ago real and imaginary differences alike. As a result, it is a small shock when Ben reverts to his life when his personal assistance, Zooey, contacts Matt asking him to meet because he is cancerous.

It seems that Ben, a renowned photojournalist, has some films he would like to develop before the final Kodachrome lab closes. He plans a trip to the other side of the country and would like Matt to accompany him and Zooey. Matt refuses, not accepting the emotional blackmail that Zooey is subject to, but when his manager tells him he can arrange a meeting with The Spare Sevens, he agrees to go on a journey with his father and his assistant.