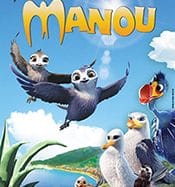 Since childhood, Manou has grown up thinking he is a seagull. He has struggled to fish, swim and fly like the rest of his flock, but he has never been accepted as one of them. When he discovers that it is actually a swallow adopted by his parents after an unfortunate incident, Manou will decide to travel to know its origins and other birds of the same species. Seagulls and swallows will have to face a great threat together and then Manou will become an unexpected hero. Christian Haas and Andrea Block, with extensive experience in special effects of films such as Assault on Power or Independence Day: Counterattack, debut as directors in this animated film starring a fast swallow that has been raised as a seagull. The family and the search for their own identity are the main themes of a film that shines when it comes to capturing the beautiful landscapes of the French Riviera, while proposing a thrilling and fun story where two opposing species of birds come together, thanks to its young protagonist, to fight a common enemy. The different characteristics of these birds, such as the impressive dives of the seagulls or the aerial choreographies of the swallows, add another point of spectacle to a group that, with large doses of adventures and sense of humor, will delight children. In its English version, Manou has an interesting voice cast, led by the experienced Josh Keaton (Emoji: The Movie) and seconded by the Oscar-winning Kate Winslet (Wonder Wheel) or the nominee for four awards from the Willem Dafoe Academy ( Aquaman), among others.