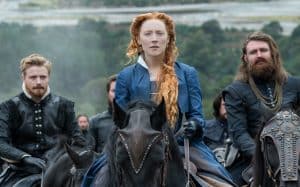 In 1561 Mary, 19, the Catholic Queen of Scotland, returns to her native country in France after the death of her husband, Francis II of France, to claim her throne and is met by her stepfather, Count by Moray. In neighboring England, her cousin, Elizabeth, aged 28, is the Protestant Queen of England – unmarried, without children and threatened by Mary who could take her throne. Soon, Mary is in conflict with Cleric John Knox, whom he removes.
Knox is a Protestant and leader of the Scottish Reformation, conquering Mary as a danger to the Protestant supremacy of the kingdom. In an attempt to weaken his cousin’s threat to his throne, Elizabeth arranges that Mary, whom English Catholics see as their queen, to marry an Englishman. She chooses Robert Dudley, a man whom she loves secretly, to ask her to marry Mary.
None of them are willing to marry, but the news that Elizabeth is sick, she convinces Mary to accept, thinking that Elizabeth will call her heir. Eager to give up Dudley, Elizabeth secretly sends Lord Darnley to Scotland with the pretext of living under their religious freedom. Despite the fact that Mary feels there is a hidden reason for her arrival, she begins to gradually get attached to him and even gets to accept her request in marriage. Mary’s impending marriage to Darnley creates a constitutional crisis in both kingdoms.