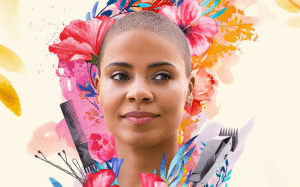 A young woman named Violet (Sanaa Lathan) seems to have a perfect life. She enjoys success at work where she is executive director at an advertising company, has a beloved doctor named Clint (Ricky Whittle) with whom she has been together for two years and a perfect hair for which she makes great efforts to keep it so. But expecting her boyfriend to ask for his wife on his birthday, he offers instead of a ring a puppy, which infuriates her and breaks away from him.
He tells Violet that he does not really know her because he seems to be too perfect for him. After Violet loses a very important job contract and has a mess in the hairdressing salon, she begins to realize that her hair was a token of not living her life as she would have wanted really do it.
After trying to paint her hair in a blonde hue and the result is not exactly what she expected, she decides to take a radical measure – to shave her head. At first horrified by what she could do, she became more confident in her decision and her new look. She then starts out with the owner of the hairdressing salon, Will (Lyriq Bent), and joins her daughter, Zoe (Daria Johns).