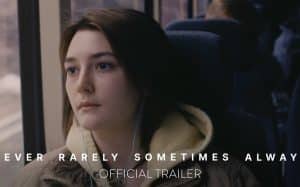 Autumn, a 17-year-old teenager, is faced with an unwanted pregnancy. Not being ready to be a mother, she decides to have an abortion, but since she is a minor, the authorities do not allow her to do so without the consent of her parents. Desperate, she finds in Skylar, her cousin and best friend, the unconditional support to embark on a trip to a clinic in New York. However, what they believed would be a quick process will turn into two days in the Big Apple that will change their lives.

The case of Savita Halappanavar, who died in 2012 due to restrictive Irish laws, which prevented her having an emergency abortion that would have saved her life, shocked the world. Also to Eliza Hittman (For Thirteen Reasons) who, investigating, came across hundreds of stories of women who had to leave Ireland to terminate their pregnancy legally and safely. In this way, Never, almost never, sometimes, always emerged, a heartbreaking drama with which she completes her particular trilogy (along with It Felt Like Love and Beach Rats) about teenagers at crucial moments in their lives. On this occasion, the director, a new revelation of American indie cinema, tries to avoid making value judgments and show different opinions on an issue as polarized in American society as the reproductive rights of women, while denouncing a health system with serious difficulties in addressing this issue. Newcomers Sidney Flanigan and Talia Ryder play two powerful female characters who, in this Berlinale and Sundance Film Festival award-winning film, embark on a journey filled with uncertainty and pain, but also solidarity, compassion and friendship.