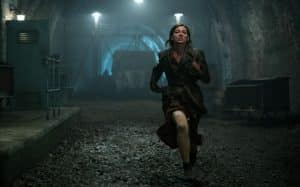 On the eve of Day Z, June 5, 1944, a paratroopers team is sent to destroy a German radio tower in an old church. However, their plane is shot down before they can reach the target and only five survivors remain: Ford Corporal and soldiers Boyce, Tibbet, Chase and Dawson. The latter dies because of a land mines, but the rest continues their journey by meeting a French woman named Chloe who agrees to guide them to the village where the radio tower is.
The soldiers find out that the woman lives with a younger brother just eight years old and their aunt who has been disfigured by the Nazis’ experiments they performed in the repressive church. After Tibbet and Chase split up to verify where they should first arrive, the remaining soldiers are forced to hide in the attic when a Nazi routine inspects. But when a Nazi tries to rape Chloe, Boyce attacks him and gets caught.
Trying to get to the meeting point, Boyce sees how the Nazis are defiling villains disfigured by experiments made on them. He is about to be caught by a dog and escapes into a truck in which there are more cadavers of other paratroopers. Arriving at the base, Boyce learns that there are more experiments in the Nazi lab based on a mysterious liquid discovered by the Nazis in a creepy process. Boyce steals a sample of that serum and saves Rosenfeld, another parachutist who was captured by the Nazis and the two run away from the castle.