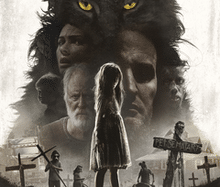 Dr. Louis Creed moves with his wife Rachel and their two young children to a house in the most rural area of ​​Maine. They soon discover that, deep in the forest, a short distance from their new home, there is a small and mysterious animal cemetery that makes the animals buried there come back to life. When the tragedy hits the Creed, Louis will ask for help from his neighbor, unwittingly initiating a chain of events that will release an ancestral evil. Still in the top 5 of Stephen King’s most blockbuster film adaptations, the classic Animal Graveyard comes alive in this remake directed by Kevin Kölsh and Dennis Widmyer (Starry Eyes). As it happened in the novel and in the film that precedes it, this film talks about death and family love through great doses of terror both in the form of scares based on paranormal phenomena, and when it deepens into a much more real fear and threatening: that of parents willing to do anything, even flirt with demonic forces, for the welfare of their children. In line with other recent successes based on the work of the writer from Maine (like It), this film offers a dark and spooky plot where an evil presence terrorizes the inhabitants of a small American town. Jason Clarke (First Man), Oscar nominee John Lithgow (Two parents for Unequal), Amy Seimetz (Alien: Covenant) and Jeté Laurence (Snowman) lead the cast of this film, atmosphere Insane, that is allowed to make some changes on the original material in order to surprise the viewer and keep it gripped to the seat.