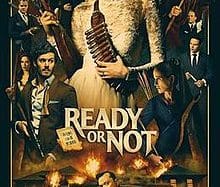 Grace is a girl of humble origins who falls in love with Alex Le Domas, the son of a wealthy family that has built her empire around board games. The courtship ends in an opulent wedding at the Le Domas mansion. Everything is going well until Grace receives the invitation to participate with her eccentric political relatives in an ancestral tradition. When, without knowing it, choose the hiding card, the young woman will have to remain hidden and play a game where if she loses, she dies. In his second feature film, the duo formed by Matt Bettinelli-Olpiny Tyler Gillett (The Devil’s Heir) intends to break the molds of survival. Between terror and black comedy, the filmmakers turn the mansion of a billionaire clan of the board games industry into a gigantic board where the bloodiest and most chilling hideaway game of all time is fought. The eccentricities of the rich and the fears that emerge just before being part of a new (and sometimes almost unknown) family take a fun and perverse twist on their wedding night. The protagonist is a young woman of humble origins who, after marrying one of the heirs of this empire, will have to consummate her adhesion to him through a strange ritual: to survive a human hunt that will take her to the physical and emotional limit. Samara Weaving (Three ads in the suburbs) and Mark O’Brien (Bad times in El Royale) are the fleeing couple of this film full of irony, scares and violence. The cast is completed by Adam Brody (Shazam!), Henry Czerny (Team A) and Andie MacDowell (Heroes in Hell), the latter in the role of the worst in-laws in the world.