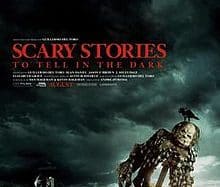 Scary Stories to Tell in the Dark

In the small town of Mill Valley, its inhabitants live outside the new times and social changes that occur in 1968. There, a group of bored teenagers explore an abandoned mansion on the outskirts of the city and where the mysterious and tortured Sarah Bellow lived , which left written horror stories that begin to come to life when young people discover them: a scary scarecrow, a corpse in search of one of its fingers or an insect bite on the face. The series of books by Alvin Schwart, Story of fear: chilling stories to tell in the dark were the first books of many Anglo-Saxon children in the eighties and nineties, who thus further entered into the supernatural and filled their minds with nightmares and got damn. This same year 2019 the documentary Scary Stories was released, which explored the creative process of books and their inspiration. But part of the new rebirth of the children’s book collection is due to the premiere of the horror film Scary Stories to tell in the dark, which adapts some of the stories in the series. The person in charge of carrying out this adaptation was Guillermo del Toro (The form of water) as a producer, who has put the Norwegian director André Øvredal (Jane Doe’s autopsy) at the forefront of the project. Øvredal has been based on the illustrations of Stephen Gammell’s books for the construction of the terrifying characters: the scarecrow, the corpse in search of one of his fingers or the pale woman. The actors chosen were the very young Zoe Colletti (Fires) or Michael Garza (The Hunger Games: Mockingjay. Part 1), seconded by the already veteran Gil Bellows (Life imprisonment).