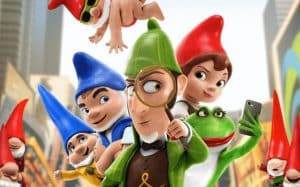 Sherlock Gnomes and his assistant, Gnome Watson, give their way to a museum where their biggest enemy, a mascot called Moriarty, keeps hostages more garden dwarves, planning to destroy them. After a short fight, Moriarty is defeated and apparently killed by a dinosaur skeleton. Meanwhile, Gnomeo and Juliet, as well as the rest of the garden goblins, move to London. While they were there, the two lovers are proclaimed as garden leaders.
Gnomeo leaves to find a flower to plant in the garden, but he is caught. He and Juliet have a little bit of a fight, but then they realize stupidly that the rest of the garden dwarfs are missing. Sherlock and Watson arrive on the scene to investigate, and then Gnomeo and Juliet join forces with them to get the head off of this mystery. Sherlock follows a path that Moriarty offers him that he thinks he would still be alive after their last confrontation.
The group then splits to cover more tracks in a shorter time. Later, Watson appears to be killed by a Gargaolian stone, which profoundly saddenes the group. Eventually, Sherlock realizes that the next clue is in the park. He and Juliet disguise themselves in squirrels so they can get some information from a dog and they can do it with great difficulty. Meanwhile, Gnomeo finds the place where the dwarves are held captive.