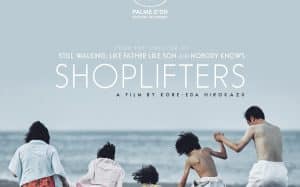 A group in Tokyo lives in lucky poverty. Osamu used to work with the day, but lost his job after wounding his ankle, and what his wife wins at an industrial laundry is very little to get them from one day to the next. Together with a Shota nude boy, Osamu steals things from stores using a sign-on system. Osamu teaches Shota to steal only things that have not been sold and which, therefore, do not belong to anyone.
On a very cold night, they see Yuri, a little girl in the neighborhood whom they have seen several times left on the balcony of an apartment. They decide to take the girl home by intending to give her a warm meal and so, but when she finds signs that the girl has been abused they choose to let her stay with them longer, even if it’s hard to feed a mouth in addition…
Yuri begins to get attached to her new family and is taught by Osamu and Shota to steal with them from stores. Osamu asks Shota to look at him as a father and Yuri as a sister, but he does not take much notice of it. The family learned from television that the police were investigating Yuri’s disappearance; so they tune the girl and give him a new name: Lin. But while things go well, Shota begins to feel remorse about teaching Yuri to steal.