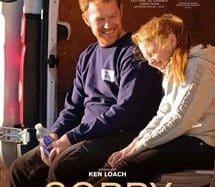 Sorry We Missed You

Ricky, Amy and their children Lisa and Seb are a working-class family from Newcastle. Although the two work hard (Ricky has moved from one job to another and Abby enjoys caring for the elderly) they know that achieving economic security that allows them to own a home is virtually impossible. However, the Internet revolution will give Ricky an opportunity to recycle as a delivery man and be his own boss. To achieve this, they will have to risk everything from their car to the ties that bind them. Although with me, Daniel Blake, Ken Loach saw the moment of his retirement close, the new techniques of exploitation of the workers led this 83-year-old filmmaker, always committed to social causes, and his inseparable screenwriter, Paul Laverty, to do One more movie. The result is Sorry We Missed You, a drama about today’s British working class that addresses the phenomenon of the gig economy, where the emergence of different internet services and applications has given rise to a whole market of false self-employed people who, Attracted by the promise of being their own boss, they end up trapped in marathon days under precarious conditions, without social protection or savings for future retirement. The film addresses how the suffocating pressure exerted by this new and more ruthless capitalism affects the ties of a typical humble family in the United Kingdom, to which the economic crisis deprived them of their dream of owning a home. The debutants Kris Hitchen, Debbie Honeywood, Katie Proctor, Rhys Stone or Ross Brewster play the protagonists of this honest and exciting film.