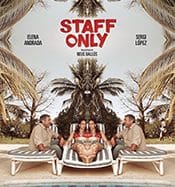 Marta is a 17-year-old teenager who, with her father and her brother, spends Christmas holidays in Senegal. The only downside of this exotic trip is that he barely has freedom, as he has filled the agenda of safaris and cultural visits with retirees staying at the resort. In search of people his age, Marta will meet a young hotel worker who records the excursions of tourists. This new friendship will strain the relationship with your family and force them to talk and understand each other. After an applauded cousin, Neus Ballús (The Plague) directs a film that, through the eyes of a 17-year-old teenager who begins to realize how the world works, talks about social inequalities and clash of cultures in a Luxurious Senegal resort. Applauded in festivals such as San Sebastian, Berlin or Malaga, Marta’s trip (Staff Only) becomes an exciting feature film that is inspired by real stories and whose core develops a journey of maturity and reconciliation that will change forever the complicated relationship between a father and his daughter. The drama is combined with some humorous notes in this film that goes into the less glamorous places of these hotel venues to show the difference between good and bad tourism in Africa and the way that Western visitors experience a sweetened version of The reality in this continent. Sergi López (7 reasons to flee) brings experience to a cast completed by debutants Elena Andrada (who plays the protagonist), Ian Samsó, Diomaye Augustin Ngom and Madeleine C. Ndong, among others.