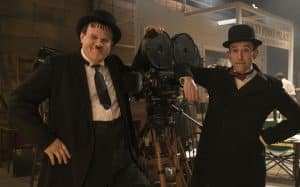 In 1937, while performing “Way Out West,” Stan Laurel refuses to extend his contract with Hal Roach because Stan believes that the studio and Roach himself do not appreciate financially the true qualities and fame of the famous comedy duo. Oliver Hardy, however, remains linked to Roach with a different contract and the studio tries to make him work with Harry Langdon in the movie Zenobia. While Laurel and Hardy will reunite soon, Ollie’s absence from a meeting with Fox results in abandoning the project, and Stan feels betrayed, wearing grudges for many years.
In 1953, the two started on a musical tour through the United Kingdom and Ireland as they struggled to make a new film: a comic adaptation of Robin Hood. However, Bernard Delfont’s promotion shortcomings in the UK make their tournament hard to start, with very few viewers because Delfont focuses more on another star.
Eventually their success begins to be more prominent with Delfont’s serious involvement. During the tour, the two continue to write and make various film gangs. When the tour finally arrives in London, Stan visually visits the filmmaker and discovers that there are no sufficient funds for the project and as a result has been canceled. He is very disappointed, but knowing that Ollie would be even more disappointed, he’s hiding his booze and the two continue to develop the script for the film.