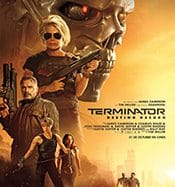 Two decades have passed since Sarah Connor managed to avoid Judgment Day and write a new destiny for the human race. However, his past returns when a more advanced and lethal Terminator arrives from the future to assassinate Dani Ramos, a young woman who lives in Mexico with her brother and father. To survive, Dani will have to ally with Sarah, Grace (an improved supersoldier who has also traveled in time) and an obsolete T800 that could be her only hope. The return of James Cameron as producer and responsible for the story and that of Linda Hamilton (A town called Dante’s Peak) in front of the cameras is the first indication that the great objective of Terminator: Dark Destination is to recover the original foundations of This saga, one of the most profitable science fiction movies, which seemed to have been lost in their latest installments (Terminator 3, Terminator: Salvation and Terminator: Genesis). Precisely these last three disappear from the chronology with this film directed by Tim Miller (Deadpool) that starts years after what happened in Terminator 2: The Day of the Last Judgment. The fast-paced rhythm, the raw and blunt action, the tension, the terror and the unease in the face of an apocalyptic future are once again the main ingredients that support this film where there is no longer only a strong female protagonist, but three. Mackenzie Davis (Tully), in the role of an advanced mix between human and machine, and Natalia Reyes (Summer Birds), as the new target of the murderous cyborg that, on this occasion, plays Gabriel Luna (Freeheld, an unconditional love) they complete a main cast where, as it could not be otherwise, there is also Arnold Schwarzenegger (A Story of Revenge).