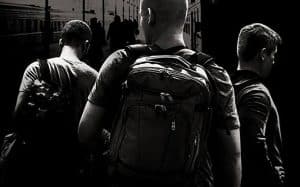 The 21st of August 2015 had not begun well, and the whole world was silenced and staring at the televisions that were constantly reporting on a terrorist attack attempt that had taken place in the train # 9364 to the capital of France, Paris! This attempt, however, was thwarted by three courageous American youths on a journey across Europe. Without any specific training in anti-theor-fighting or military training, the three young men became overnight and unwillingly known heroes all over the world.

The film takes us through the lives of the three young people and presents us their life story from the endeavors that they had to overcome in their childhood, and then the attempts to understand what their purpose is on the earth and trying to find the way the right one towards a better future, reaching the point where they are dealing with these terrorists that endanger their lives and the other hundreds of passengers. Through this critical situation, the friendship of the three youngsters is subject to the ultimate test, and this will prove to be their most important weapon in the fight against terrorists and will allow them to save the lives of over 500 train passengers.