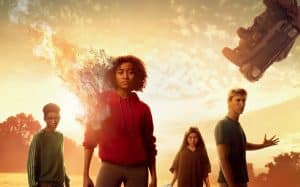 A sudden illness kills over 90% of children around the world and leaves survivors with some unusual abilities. As a result, the governments of the world place survivors in a “rehabilitation camp” where they try to cure children of this disease, placing them in different categories based on their abilities. Ruby Day celebrates its tenth birthday with her family, and her father offers him a keychain. Seeing her parents’ concerns about the disease, Ruby tries to console her mother by taking her hand and wiping away all the memories with her.
The next morning, her mother locked her in the basement and, having no memory with her, sent her to the rehabilitation camp where Ruby decides to be an “orange” – one of the most dangerous categories where children have the skills of control the minds and memories of other people. Ruby uses his skills to persuade his supervisor to be a “green” – the least dangerous category with extremely high intelligence.
Six years later, Ruby is discovered to have lied and is, in fact, an orange following a test to which it is subjected, and which only the orange can pass it. Cate Bebie, a doctor whose name is actually Cate Connor, turns out to be part of the League of Kids, an organization that uses survivors as soldiers, and helps Ruby escape the camp. The two go together to a gas station where Cate gives Ruby a panda that can turn into a tracking device if it’s ever in jeopardy.