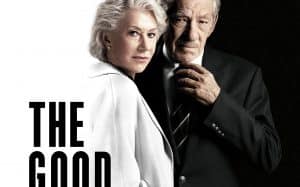 Professional con artist Roy Courtnay cannot believe his luck when, through a dating website, he makes contact with Betty McLeish, a billionaire who has just been widowed. Determined to keep his fortune, Roy begins a strategy of tricks and manipulations to seduce Betty, who soon opens his home and his life. What appeared to be a scam of the simplest, will become a game of cat and mouse full of dangers, betrayals and unexpected feelings. The film adaptation of Nicholas Searle’s best seller by Oscar-winning Bill Condon (Beauty and the Beast) serves as an excuse to witness on the big screen something that only a privileged few had enjoyed on Broadway: an interpretive duel between the winner of the Oscar Helen Mirren (Fast and Furious: Hobbs and Shaw) and the two Academy Award nominee Ian McKellen (Mr. Holmes), authentic living myths of the seventh art. The big lie proposes a game of intrigues in the purest Hitchcock style, where suspense and danger are combined with the drama of this couple of protagonists where none is who appears. Deception, crimes and an unexpected love story that complicates a scammer’s plan to gain the fortune of a wealthy widow make up the core of a movie full of amazing script twists that reflect on human relationships. In the shadow of these two titans, they complete the cast Russell Tovey (Pride), Jim Carter (Downton Abbey) and Mark Lewis Jones (Star Wars: The Last Jedi), among others.