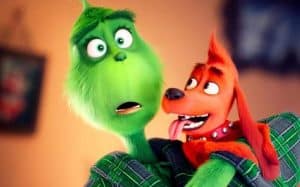 In Whoville, the humanoids named “Whos” are very excited about the celebration of Christmas. The only one delighted at the feast is a green furry creature called Grinch. This creature has a heart two times smaller than normal, and lives like a pestifer in a cave at the top of the Crumpit Mountain, north of Whoville. Grinch has a pet dog named Max and they both go to Whoville only when Grinch needs to buy food and do bad things.
Meanwhile, a six-year-old girl named Cindy Lou who notes that her mother is overwhelmed in trying to take care of her and her two smaller twin brothers, Buster and Bean. At first, she decides to send a letter to Santa Claus to help her mother, but after meeting Grinch and telling him sarcastically that he will have to talk to him to help her, she decides to go to the North Pole to personally meet Santa.
But when Donna announces that her way to the North Pole and back would take her about a month, she thinks she’s better trying to capture Santa Claus with the help of a few friends. As Christmas approaches, all the Whoville celebrations remind Grinch of his unfortunate childhood, largely alone and unwanted in an orphanage. Grinch decides to steal the Whoville people’s Christmas to relieve their suffering.