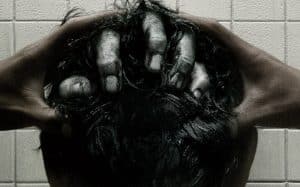 Peter Spencer is the real estate agent who is responsible for selling the house on Reyburn Street where some truculent murders occurred. The strange experience that lives there leads him to contact Detective Muldoon, who will help solve the long chain of horrors that surrounds this macabre place, and that seems to proceed from Japan. However, they will soon discover that they themselves have been infected with this curse that leaves behind an insatiable thirst for violence and revenge. More than 15 years after bringing the Japanese horror classic to The Curse to Hollywood, producer and director Sam Raimi sponsors a new remake of the one in The Curse. Nicolas Pesce (Piercing), one of the emerging talents of the genre, puts himself at the helm of this production that directly connects with the trilogy of the first decade of the 2000s, but at the same time offers a revolutionary new point of view. In this way, the scares and disturbing atmosphere characteristic of the saga are once again the strengths of a film that plays with different timelines to form a gloomy puzzle that the viewer must solve with its protagonists: a real estate agent and a detective who they will end up wrapped in this spiral of vindictive spirits and unexplained deaths. John Cho (Searching) and Andrea Riseborough (Mandy) lead the distribution of this film with greater doses of blood and violence than their predecessors. The cast completes the Oscar nominees Jacki Weaver (Better than ever) and Demián Bichir (The Nun), as well as the terror diva Lin Shaye (Insidious. The last key) in the role of an old woman who, far from fleeing from this Haunted house, you want to live there.