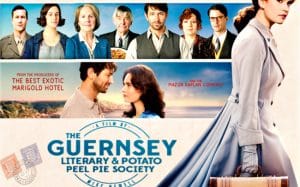 In 1941, on the island of Guernsey, four friends were stopped by soldiers for violating an order when the island was occupied by Nazi Germany. When asked questions, they say they are coming back from an improvised book club on the spot to avoid being arrested. Five years later, in January 1946, author Juliet Ashton promotes his latest book, written as Izzy Bickerstaff. She was recently contacted by her publisher, Sidney Stark, writing stories about The Times Literary Supplement about the benefits of literature.
Juliet receives a letter from a certain Dawsey Adams, a guy from Guernsey, who was in possession of a certain book she owned from author Charles Lamb, wanting to know which bookstore in England could find other works by that author. He tells him that he is part of the book club group that the young people mentioned at the beginning and that they have meetings every Friday night.
Juliet sends him another book from the same author to get more information about the literary club and how it was founded. She decides it would be interesting to write about this book club and goes on a visit to the island, despite Sidney’s reserves. Upon arrival, Juliet takes part in club meetings where she is treated as a celebrity. Instead of returning home at the end of the weekend, Juliet remains to deepen the history of the club, telling them to write about the German occupation.