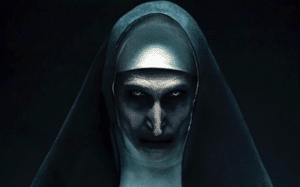 A monastery in Romania becomes the battlefield between the forces of good and evil. Finding out about a tragedy that happened at that monastery where one of the nuns took a shocking decision to commit suicide, committing one of the most serious sins in Christian-Orthodox religion, the Vatican leaders want to find out what happened there and for to do so they send a priest and a future nun to start an investigation to make light in this case.
But the priest sent to Romania also has some problems that will haunt him, and the young nun is to take his final oath to become a monk. When they arrive in Romania, they begin their investigations and as they sink into the secrets of their monastery they risk not only life on Earth but also their beliefs or even their own souls, because they bring to the surface an extremely powerful demon that creates supreme blasphemy taking in the claws its a nun.