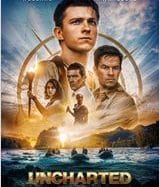 Cunning young thief Nathan Drake is recruited by veteran treasure hunter Victor “Sully” Sullivan to recover a fortune lost by Ferdinand Magellan 500 years ago. What at first was a robbery plan for both, turns into a heart-stopping race around the world to get the loot before the ruthless Moncada does it, who claims that he and his family are the true heirs. If Nate and Sully can decipher the clues and solve one of the world’s oldest mysteries, they’ll be in a position to find the $5 billion treasure and maybe even Nate’s long-missing brother, but only they will succeed if they learn to work together.

With the aura of a cursed project, even for a film framed in the always (and sometimes unfairly) reviled genre of film adaptations of video games, Uncharted has finally become a reality at the hands of director Ruben Fleischer (Zombieland: Kill and Finish). The film, which serves as a prequel to what was seen on video consoles, proposes a fast-paced adventure in which its protagonists will travel halfway around the world to find a legendary treasure and, along the way, forge the friendship on which the legendary PlayStation franchise is based. On their way will be mysteries unsolved for centuries and spectacular action sequences that will not disappoint fans of the source material. Tom Holland (Spider-Man: No Way Home) and Oscar nominee Mark Wahlberg (Mile 22) become, respectively, the flesh-and-blood Drake and Sully. They are joined in the cast by Sophia Ali (Truth or Dare) and also Oscar-nominated Antonio Banderas (Pain and Glory), as the film’s great villain.