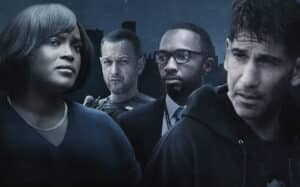 We Own This City

We Own This City is a new HBO drama created by the pair behind the legendary series The Wire, David Simon and George Pelecanos. The new 6-episode miniseries is based on the book written by Baltimore Sun reporter Justin Fenton; it tells the story of the rise and fall of the Baltimore Police Department’s Gun Trace Task Force, of corruption and moral collapse in a city where drug prohibition and mass arrests have taken the place of actual police activities. Jon Bernthal (The Punisher) plays Sgt. Wayne Jenkins, the central figure in a federal corruption case that revealed the true face of the Gun Trace Task Force, a unit of plainclothes police that ended up hunting and robbing both drug traffickers and ordinary citizens. Wunmi Mosaku (Lovecraft Country) is Nicole Steele, a lawyer in the Civil Rights Division of the Department of Justice, who investigates the practices of the Baltimore Police before handling the criminal investigation against the Gun Trace Task Force.